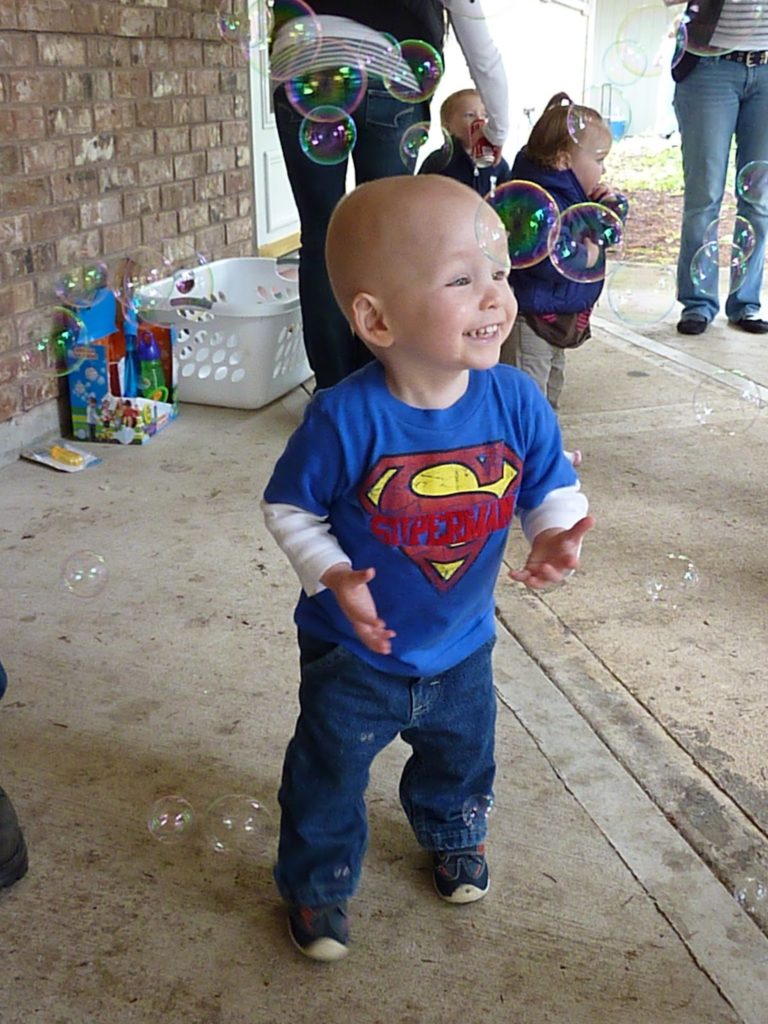 A stream of bubbles greets all who enter 23-month-old baby Jordan’s patient room on the Cancer and Blood Disorders floor of Randall Children’s Hospital in Portland, Oregon. After observing his remaining bubbles dissipate into the air, Jordan insists on moving on to his mother Brittany’s iPhone, which has an app that is also (you guessed it) bubble-themed.

With a close analysis of white blood cell count, inspection of a central line and a meticulous physical exam, Jordan’s latest doctor’s appointment differs from that of most infants. On November 2, 2011, Jordan was diagnosed with Hepatoblastoma, a very rare form of liver cancer affecting 1 in 1.5 million, which is most commonly diagnosed during the first three years of life.

After mild concerns arose about Jordan’s growth pattern during his 12-month check up, Brittany and Jordan’s father Trevor ended up trepidatiously waiting while a gastroenterologist met with an oncologist and several atypical tests, including an ultrasound, were performed on Jordan.

“I kept thinking ‘I know this is bad’ when multiple doctors got involved,” Brittany recalls. Jordan’s tumor was diagnosed as stage three, generally meaning the tumor had begun to spread outward to surrounding areas and some lymph nodes, but had yet to metastasize. Charged to respond, Jordan started chemotherapy at Legacy Emanuel Hospital just two weeks after the initial diagnosis.

“Everyone said the beginning is the hardest, and they were right.” Brittany explained. “I had my major meltdown a few days after Jordan’s diagnosis, after that I resolved to keep it together.”

Throughout his treatment, Jordan’s hair fell out and he was often nauseous. He went through four rounds of chemotherapy, surgery at Lucile Packard Children’s Hospital at Stanford University to remove the tumor and 70% of his liver, followed by two more round of chemotherapy.

“Hospitals overwhelmed our lives…everything was about the cancer,” Brittany said. “I am so grateful that we had so much help, from Trevor’s mom coming to stay with us to the whole community supporting us emotionally, financially and with their time.”

Each time Jordan would get a blood transfusion during treatment, Brittany said his energy would come back. “Each transfusion Jordan got allowed him to be strong enough for the next round of chemo,” Brittany confirmed. “Watching his skin color turn from pale to a healthy pink was so amazing! If Jordan hadn’t received those transfusions, he would’ve had to wait weeks longer between rounds of chemo. He would probably still be in treatment, and the extra time could have allowed the cancer to spread.”

Six rounds of chemo, six blood transfusions and six months later, at 20 months, Jordan was cancer free! After his white cell count rose, he’s been able to be outside in the warm sun and fresh air. “Jordan is super resilient,” Brittany proudly exclaims. “He did so well with few side effects, no mouth or skin sores and has even started getting his hair back!”

Both mother and son are beaming as their doctor leaves the room; their latest medical results mean the possibility of finally engaging in simple activities like visiting the grocery store, having picnics in the park and enjoying the summer sunshine. “The biggest thing is that we can now get back in the world,” Brittany sighed in relief.

“We are happy to say that Jordan has now completed treatment, and life is slowly getting back to normal,” Brittany said. “We will have follow up appointments for a long time to come, but we are hopeful that Jordan will be cancer free for the rest of his long, happy life. “