John Vinje was born and spent his early years in North Dakota but is
pretty much a native of Minnesota. He lived there 49 years and volunteered with
the Red Cross before moving to Oregon in 2013. He joined the Southwest Washington
Chapter of the American Red Cross soon thereafter. 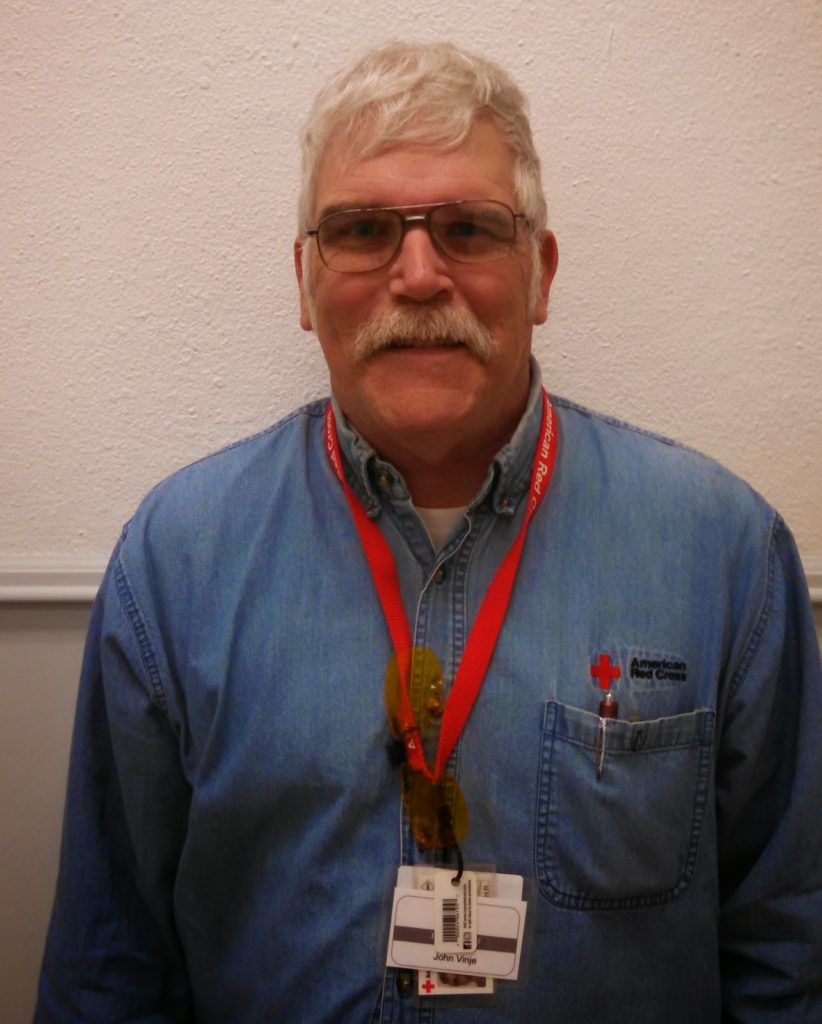 During his working career John was a truck driver, construction worker
and a paralegal. In the course of his work he adopted a strong
roll-up-your-sleeves and get busy orientation, which has strongly characterized
his work on volunteer assignments. John’s first exposure to the Red Cross was
when they assisted him and his young family after a home fire. The comfort and
support they provided stuck with John and led him back to volunteering years later.
John has a passion for disaster services, having served extensively in Disaster
Assessment and Disaster Services Technology. John is particularly interested in
Disaster Services Technology which he sees as interesting and challenging. “It’s
about getting the necessary equipment in place so we can have accurate and
current communications during disaster relief efforts,” says John. “Pretty essential
to an effective operation!”
John has been on a number of major deployments, but says Hurricane
Katrina was probably the most memorable. Just after arriving in Louisiana he
remembers being headed to his initial work site when they rounded a turn and
discovered a 60 foot boat sitting well inland in the middle of the roadway.
Along with the boat, John remembers seeing areas with acres and acres of
trashed lumber but no standing homes. What has repeatedly impressed John in his
deployments is the number of Red Cross volunteers who show up to provide relief
and help for major disasters. While his work doesn’t normally expose him a lot
to storm victims, he clearly was affected by people’s relief at seeing the Red
Cross. “They told me if we hadn’t showed up, they would have starved.” John
spent almost 20 days supporting that relief effort.
John is an advocate of mentoring volunteers. “Mentors show people how to
do the work needed, explain how and why the work is important, then step back
and allow volunteers to really get into the job. Working alongside the new
person is important along with providing solid feedback. Shortfalls need to be
immediately corrected. Most people are far more resilient than we allow. People
grow from frank and specific feedback.”
In much of his Red Cross work John has been called upon to lead.
“Regardless of your role, it is important for disaster-relief volunteers to
have large measures of patience and flexibility in their knapsack,” John points
out. “The need for help and the readiness of resources cannot be programmed in
these chaotic and fast-changing situations.”
Red Cross
volunteer profiles are written by communications volunteer Patrick Wilson and
provide a behind-the-scenes look at some of the incredible people who help to
deliver our mission.