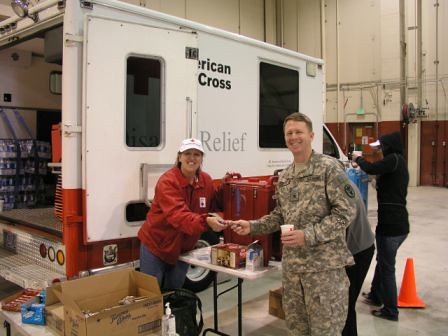 Remember Mike’s post about the National Disaster Medical System Port of Portland drill at PDX airport? Well, a volunteer just sent us some more photos of it. I posted them here, on our Flickr.

Here’s the scoop on the NDMS drill, for which Robin posted photos on Flickr:

The National Disaster Medical System (NDMS) is a federally coordinated system that augments the Nation’s medical response capability. The overall purpose of the NDMS is to establish a single integrated National medical response capability for assisting State and local authorities in dealing with the medical impacts of major peacetime disasters and to provide support to the military and the Department of Veterans Affairs medical systems in caring for casualties evacuated back to the U.S. from overseas armed conventional conflicts.

The National Response Plan utilizes the National Disaster Medical System (NDMS), as part of the Department of Health and Human Services, Office of Preparedness and Response, under Emergency Support Function #8 (ESF #8), Health and Medical Care, to support Federal agencies in the management and coordination of the federal medical response to major emergencies and federally declared disasters including:

Bottom line: The Red Cross participated in both drills and the shot above shows one of our Emergency Response Vehicles (ERVs).

One thought on “Photos From the NDMS Drill”