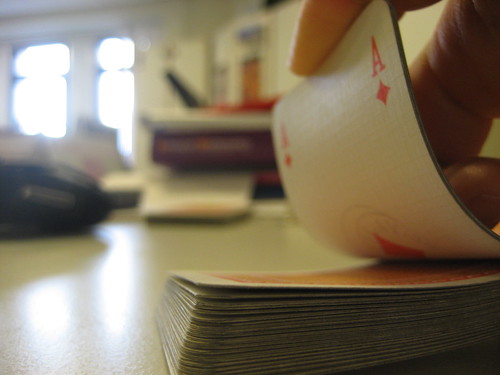 As you know, this year’s storm season in the Midwest has been unusually intense. I’ve been getting updates about every other day from my family in Kansas. Things like:

“Hi honey. We’re in the basement again playing Canasta because we’re under another tornado warning.”

“Hi honey. All is well. We played Canasta. Your sister won. Tornado touched down nearby, but no damage.”

“Hi honey. We had really hard rain and a little hail at our house but no damage. We have been really lucky so far that the worst of it has missed us. And it gives us a good excuse to go down to the basement and play Canasta, so it’s not all bad.”

Almost every one of their messages mentions Canasta. And I just realized that this is a really important part of their disaster plan. We at the Red Cross always suggest that people include a pack of cards in their disaster kit because when you’re sheltering somewhere for a long time you get bored.

But what we might forget to mention is that you better know how to play a game with those cards! So I found this site with a gazillion card game rules (including the rules to my family’s favorite game). Print off the rules to a few games and put them in your kit along with your cards!