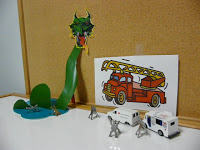 Today’s BLOG OFF 2008 challenge comes from a Portland Mercury reader who said,“I’d like to hear a response plan from each agency on a Nessie-esque beast in the water reservoirs. Assume it is dangerous, eating skinny dippers, dragging dogs underwater, etc.” The moderators offered bonus points for illustrating the scenario. We decided to up the ante by making a video. (See below.)
Usually the American Red Cross is busy responding to more conventional emergencies like housefires, hurricanes and earthquakes. But when disaster unexpectedly strikes — be it Godzilla, Mothra or Nessie — Red Crossers are ready to take action.

Given that this particular monster is confined to a reservoir, the primary Red Cross responsibility would be to whip up food for police and fire departments, whose men and women would be busy trying to contain the beast and provide emergency medical care. With the hope that providing culturally-appropriate cuisine might give responders the additional strength they’d need, we’d offer morning porridge, Scotch eggs for lunch and, naturally, haggis for supper. While it would be necessary to keep everyone sober to complete their important duties, afterhours might see bottles of whisky, scotch and ale being passed around…none of which would be supplied by the Red Cross, of course.

“Reservoirs Run Red!” the headlines would scream, while local TV stations offer wall-to-wall “Monster Attack 2008” coverage. Of paramount interest are the number of skinny-dippers traumatically injured in the attacks, all of whom have required multiple transfusions. While the Oregon Trail Chapter is hard at work responding to the disaster, Pacific NW Regional Blood Services has put out a red alert, urging Oregonians in unaffected parts of the state to give blood.

When it becomes clear that Red Cross resources will be stressed, our fundraisers leap into action — “Nessie might go back to Scotland, but your money will stay right here at home.” Financial support comes swiftly from around the world, most notably from the British Red Cross (they’re responsible for Scotland), who are intimately aware of the devastation Nessie can cause.

Though this plan speaks to the Red Cross response if Nessie stayed confined to the reservoirs, we have little doubt that she’d be off the hands of the Water Bureau pretty quickly. No, the sea monster would likely be heading towards the Willamette or Columbia in no time, leaving a swath of destruction in her wake. While we’d urge Portlanders to evacuate BEFORE Nessie’s escape, if they didn’t, we’d strongly advise them to “shelter in place,” lest they get trampled. We’d also advise not drinking the contaminated water…if they had a WaterBob and a good 72-hour kit, they’d be ready, however.

Note: While Blog-Off 2008 seems like fun and games, there’s no doubt in our minds that Portland has the potential to be destroyed by a monster attack. Here are some quick suggestions for when it happens to us:

Recommended reading: The Japanese Monster Survival Guide
See what the Water Blog posted here (which, we might add is NOT a response plan, as requested by the moderators) and vote for your favorite in the comments below.