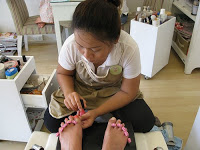 Just received this story by way of our Emergency Services staff and wanted to share it with you:

I went to a nail salon in Wilsonville to have a pedicure and just relax for an hour while being pampered. It had been a busy week. No sooner had I settled into the massage chair with my feet immersed in bubbling warm water when I realized that the elderly woman in the chair next to me was in distress.

The Vietnamese woman massaging her feet was trying to wake her up by calling her name and tapping on her legs, and the elderly woman’s 10-year-old grand-daughter was calling, “Grandma, wake up!”

It took me about 10 seconds to realize that we had an emergency on our hands. The woman’s head was bent down and mucous was dripping out of her mouth and nose. She wasn’t responding to anyone’s shouts. The grand-daughter had already started sobbing.

I hopped out of my chair and, much to my own surprise, took charge of the situation. I quickly asked another customer, who had already come running over, to call 911 while I got the woman into a prone position in the chair and checked her vital signs. Thank goodness she was still breathing, though erratically. I could barely feel the pulse in her neck.

I wanted to keep her comfortable in the chair if possible, but looked for an area on the floor that I could use for CPR if she stopped breathing. I looked at her face, full of mucous and sweat, and knew that I would not hesitate to perform CPR, if necessary.

Fortunately, she held steady until the paramedics arrived on the scene — though her blood pressure was a dangerous 55 over 30 — and I never had to perform CPR. But I wanted you to know that I felt confident that I could do what I needed to do thanks to the wonderful training given by the American Red Cross. It could have been the difference between life and death for that woman because no one else knew what to do.

What a story! Just goes to show that being trained means that you’re prepared any time, anywhere…even the nail salon.

It’s also a good reminder that, once you are trained, you should plan to carry a set of gloves and a breathing barrier in your car or purse (I have a Red Cross pen that has a breathing barrier inside!). You definitely don’t want to put your own life at risk when you’re saving someone else’s.