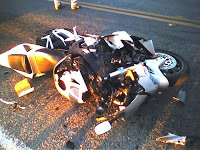 You never know when or what may come your way, that is why it so important to Be Red Cross Ready. This was recently put to the test by one of our own.

Last Thursday, on her way back from the Willamette Chapter’s Breakfast of Champions event, Health and Safety director Stephanie Morgan was the second on scene of an accident involving a motorcyclist.

She had just seen the motorcyclist pass her at a high rate of speed on I-5 between Salem and Portland when she saw a cloud of dust and debris erupt ahead of her up the freeway. Though she did not see the actual crash, when she arrived at the scene, she immediately knew that she was needed, and without hesitation was Red Cross Ready to respond.

Grabbing her gloves and a breathing barrier, she set off. For her own safety, she quickly surveyed the scene as she approached, coming to the aid of an off duty EMT who was first to respond. Stephanie said that her training kicked right in and she immediately knew what to do — maintaining in line stabilization, she helped roll the victim over and then assessed the victim’s breathing and pulse. While Stephanie continued to maintain in line stabilization, the EMT began rescue breathing and started compressions.

As the situation developed and EMS arrived, Stephanie again was ready to help by securing the site and ensuring the safety of others by keeping bystanders further from the scene.

Not all incidents have the outcome that we hope for. The victim was badly inured and passed away at the scene. Sometimes all the training of the responders and EMS can not affect the outcome. However, being Red Cross Ready and willing to use the knowledge and skills that come with training, the victim has the best possible chance for the best possible outcome.

Stephanie knew this, embraced it, and stepped forward prepared with the right tools, informed and confident in her knowledge and skills…which empowered her to respond effectively.

Photo courtesy of Uriah Welcome (not of actual accident scene)