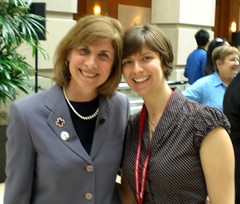 Yes, folks, she now has a fan club on Facebook. It appears to have been started by some Red Crossers down in Atlanta who were super impressed by her visit to their chapter. (As we were when we met her. See here, here, and here.)
You can even see video of her Atlanta visit on the fan page. That’s where I got the following quote, in which she talks about getting on the airplane after volunteering in a meal kitchen for Hurricane Ike survivors in Houston:

I smelled like chili and my own sweat…Nobody knew who I was, but they saw my Red Cross t-shirt, and people were just stopping me wherever I went saying, “Thank you for what you’re doing.”

You’ve gotta love a leader who will sweat right alongside her volunteers. Her tenacity and ability to inspire definitely make her deserving of a fan club. If you agree, join here.

One thought on ““I Smelled Like Chili And My Own Sweat.””