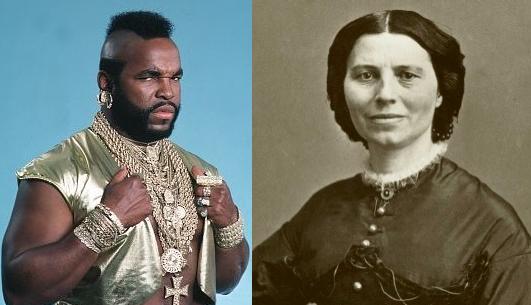 It’s so cool to share a birthday with Mr. T!

But you know who was even cooler than Mr. T? Clara Barton (or CBar, as I like to call her because she’s THAT rad), the woman who founded the American Red Cross on May 21, 1881.

I’m not kidding. This woman rocked. And I’ve had a super hard time condensing her amazing life into a few short facts for you…

Born: 1821
Skills:
– Thanks to her older brothers, horseriding and math.
– No thanks to her dad, not skating or dancing. (He didn’t think they were proper activities for girls.)
Nickname: Angel of the Battlefield. That’s not to say she was dainty or fragile. This “angel” kicked booty and took names…literally.

First Battlfield: The Education System
Long before Barton went to war, she was battling to transform public education. She founded one of the first free public shools in New Jersey. It started with one room and six students. Soon it grew to 600. So the school committee agreed to expand the school to eight rooms, but shockingly they wouldn’t let Barton be the principal (you guessed it – because she was a woman). So Barton went to look for a new career.

Workin’ for the Feds
Though few women were allowed to work for the federal government at the time, Barton managed to not only land a job as a patent office clerk but also get the same pay as her male counterparts. She did this for a few years…until the Civil War beckoned her to duty.

Anywhere Between the Bullet and the Battlefield
That’s where Barton once said her place was. And when the Civil War began, that’s where she went. There was no organized aid for soldiers on the battlefield (the few private groups offering help for the wounded were located far from the fighting) so Barton organized it herself – setting up cental collection sites where supplies could be dropped and distributed.

Knowing that the war would result in thousands of missing persons and separated families, Clara began writing down the names of the soldiers she’d seen wounded or killed on the battlefield. Her plan was to open a government office where people could inquire about missing soldiers and she could publish her lists of names. At first the government didn’t respond to her requests to set up a missing persons bureau… until President Lincoln himself got wind of the idea. He helped Barton convince the War Department to give her a small office with a few staff members.

A Trip to Europe to “Relax”
After all that hard work, Barton went to Europe to rest. But one thing she seems to have not been good at is resting. While she was there, the Franco-Prussian War broke out and Barton joined a group of volunteers carrying supplies to the battlefield. There she witnessed the fairly new International Committee of the Red Cross at work, treating the wounded and gathering donated bandages, clothing, food and supplies.

She came home determined to start a Red Cross in America, not only for wartime relief, but natural disasters as well. But first, she had to convince the U.S. government to sign the Geneva Treaty – an international agreement that allowed doctors and nurses to safely treat the sick and injured in war zones. So she campaigned for five years – writing a booklet called “What the Red Cross Is,” giving speeches and meeting with all the lawmakers she could.

And – of course – Barton won her battle. The U.S. government signed the treaty and Barton established the American Red Cross – becoming its president for the next 23 years.

I Want To Be This Awesome When I’m Old
In 1891, developers in Glen Echo, Maryland basically built a house as a gift for the 70-year-old Barton. But instead of living in it, she used it as a warehouse for disaster relief supplies! A few years later, she actually did move in and used it as the American Red Cross headquarters.

When she was 77, she took 300 tons of supplies to detainees in Cuba who were being held during fighting between Cuban rebels and the Spanish.

In 1900, when 6,000 people died in the Galveston hurricane, 78-year-old Barton led a team of Red Crossers down to Texas to distribute food, bury the dead and help reopen roads.

Clara Barton finally passed away in 1912 at age 90. And her life’s work continues on…

Thanks to Kids Discover magazine, where I found a bunch of these awesome facts.