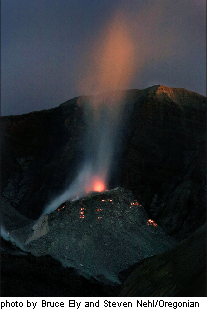 No, I didn’t make that word up. It doesn’t mean “volcano that Robin thinks is super awesome.”

According to The Oregonian, scientists are now saying that underneath Mount St. Helens may lie a giant molten supervolcano that has the capacity to cough up enough ash to block sunlight and lower the temperature by several degrees Celsius.
When could it blow? Oh, anytime within the next several hundred thousand years. One scientist says, “I don’t think it will be tomorrow, but I couldn’t try to predict when it would happen.” It never hurts to be prepared. Tips at www.OregonRedCross.org/volcanoes.
For more info and a very cool photo slideshow of Mount St. Helens, check out the article.

One thought on “We May Be Living Next To A “Supervolcano””