You already met James and Abigail, and I’d like to introduce you to a few more people and pets we met at the Emergency Warming Center during last week’s extreme cold snap… 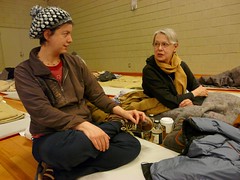 Helen and Walker are mother and daughter. They moved to Portland less than a year ago for Walker’s job. Then she got laid off. They stayed with a friend for a while, but now they’re living in Walker’s car. They had been trying to keep warming using blankets, but it was very hard to sleep. Walker says she used to volunteer at shelters. 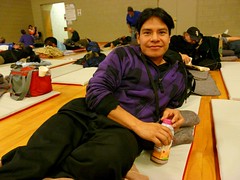 Alberto lives in a camper van. He has a part-time job, but it’s not quite enough to pay rent. He finally decided to come to the warming center after he set a bottle of water beside his bed one night and woke up to find it had frozen. Constantly smiling, Alberto tells me he is writing a book about his life experiences. 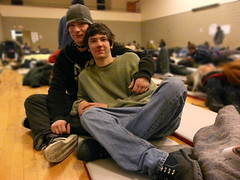 Bridger and Taranh have been living outdoors for nearly a year. They were huddling together under the Burnside Bridge to stay warm until they heard about the warming center. They say the hardest part about being homeless is breaking down stereotypes and assumptions that people make about them. They haven’t got much family around, but they say that’s okay because they’ve got each other. 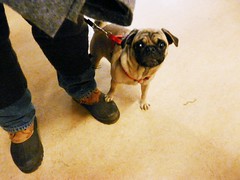 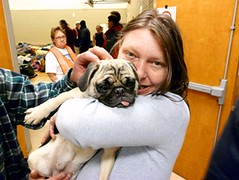 Everybody knows Porkchop, and everybody smiles when they see him.

One thought on “Stories from the Emergency Warming Center”