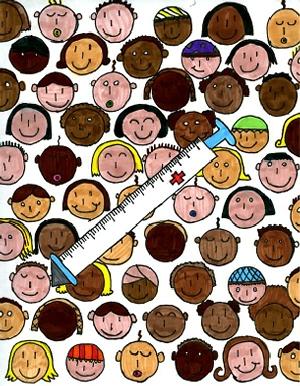 Measles is among the world’s most contagious diseases and one of the leading causes of death among children worldwide. In response, the American Red Cross and partner organizations have taken on the fight through the Measles Initiative. Robin recently blogged on the incredible efforts taking place, but I had to share some of the latest (and local) news!

December is a big month for eliminating this deadly disease. In the earlier post, Robin mentioned a reduction in measles deaths around the world – from an estimated 733,000 in 2000 to 164,000 in 2008. That’s a 78% drop in mortality in under a decade!

Other December news includes winners of a nationwide awareness campaign – the Measles Initiative Art Contest! Above is the winning entry of the elementary school category, from Garret Studer in Cincinnati, Ohio.

On a local level, Red Cross Club members at Benson Polytechnic High School decided to host a fundraiser on the day after Thanksgiving, or “Black Friday.” This is often described as the busiest shopping day of the year. By selling measles pins at only $1 each (the price of one vaccination) club members came away with more than $150 in donations!

With such inspiring results, continuing the momentum is even more critical. Bonnie McElveen-Hunter, Chairman of the American Red Cross states, “If we drop our guard, this disease will regain a foothold and spread like wildfire once again. We must stay vigilant.”