There are some easy ways to demonstrate how volcanoes and earthquakes work! Last year I was fortunate to work with Oregon State’s Robert Lillie, a Professor of Geology and Public Interpretation. To help the public understand how earthquakes and volcanoes are created with plate tectonics, he developed some simple visuals using snack foods. The second part in this two part series will discuss how plate boundaries create volcanoes shaped like popular snack foods. 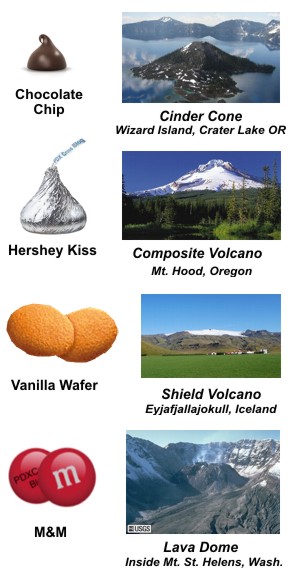 Previously, we mentioned the type of plate boundaries using oreos. Plate boundaries not only result in earthquakes, but visible blemishes in the landscape resulting from lava derived from the liquid hot magma in the asthenosphere, or pockets of hot liquids seeping up from the intense pressure where two plates converge. These Volcanoes often define the landscape, particularly in Oregon. Volcanoes take a variety of shapes, that resemble (you guessed it!) snack foods. The small, but steep, cinder cones can be related to a Chocolate Chip. The larger composite volcanoes can be visualized as a Hershey Kiss. If you lay a Vanilla Wafer flat, you can see what a large shield volcano looks like from a distance. And, if you visualize half of an M&M you see the dome shape of a lava dome. Using general information from the USGS, with some relevant local and current event information added, we can understand how these shapes are created.

Cinder cones are the simplest type of volcano. They are built from particles and blobs of congealed lava ejected from a single vent. As the gas-charged lava is blown violently into the air, it breaks into small fragments that solidify and fall as cinders around the vent to form a circular or oval cone, similar to a chocolate chip in shape. Most cinder cones have a bowl-shaped crater at the summit and rarely rise more than a thousand feet or so above their surroundings. After Mt. Mazama (a composite volcano) blew it’s top, it became Crater Lake and over time the crater had a vent eject lava creating the cinder cone known as Wizard Island. Cinder cones are common around a Convergent plate boundary.

Composite volcanoes (sometimes called stratovolcanoes) include many of Earth’s grandest mountains. They are typically steep-sided, symmetrical cones of large dimension (like a Hershey Kiss) built of alternating layers of lava flows, volcanic ash, cinders, blocks, and bombs and may rise as much as 8,000 feet above their bases. Some of the most conspicuous and beautiful mountains in the world are composite volcanoes, including Mount Fuji in Japan, Mount Cotopaxi in Ecuador, Mount Shasta in California, Mount Hood in Oregon, and Mount St. Helens and Mount Rainier in Washington. Composite volcanoes are common around a Convergent plate boundary.

Shield volcanoes are built almost entirely of fluid lava flows. Flow after flow pours out in all directions from a central summit vent, or group of vents, building a broad, gently sloping cone of flat, domical shape, with a profile much like that of a warrior’s shield and a flat Vanilla Wafer. They are built up slowly by the accretion of thousands of highly fluid lava flows called basalt lava that spread widely over great distances, and then cool as thin, gently dipping sheets. Lavas also commonly erupt from vents along fractures (rift zones) that develop on the flanks of the cone. Some of the largest volcanoes in the world are shield volcanoes. In northern California and Oregon, many shield volcanoes have diameters of 3 or 4 miles and heights of 1,500 to 2,000 feet. The Hawaiian Islands are composed of linear chains of these volcanoes including Kilauea and Mauna Loa on the island of Hawaii– two of the world’s most active volcanoes. The floor of the ocean is more than 15,000 feet deep at the bases of the islands. As Mauna Loa, the largest of the shield volcanoes (and also the world’s largest active volcano), projects 13,677 feet above sea level, its top is over 28,000 feet above the deep ocean floor. Eyjafjallajökull is a shield volcano, with two notable eruptions in 2010 so far that have been very volatile due to super-hot lava meeting super-cold glaciers, ejecting ash high into the atmosphere which has disrupted air traffic. Shield volcanoes are common around a Divergent plate boundary or Hotspot, where the hot asthenosphere comes in contact with the surface.

Lava domes are formed by relatively small, bulbous masses of lava too viscous to flow any great distance; consequently, on extrusion, the lava piles over and around its vent. A dome grows largely by expansion from within. As it grows its outer surface cools and hardens, then shatters, spilling loose fragments down its sides, creating a dome shape that resembles half of a flat plain M&M. Some domes form craggy knobs or spines over the volcanic vent, whereas others form short, steep-sided lava flows known as “coulees.” Volcanic domes commonly occur within the craters or on the flanks of large composite volcanoes. Currently, lava domes are being formed inside of Mt. St. Helens‘ crater that will eventually rebuild the structure lost during the 1980 eruption. A notable lava dome in Oregon is Newberry Volcano, located Southeast of Bend. Lava domes are common around a Convergent plate boundary.

You might have noticed something in common with all four major types of volcanoes. They ALL have examples in Oregon, which many geologists consider the most volcanically diverse areas in the planet. Eastern Oregon is defined by the Yellowstone hotspot that once traveled through the area, Western Oregon by the Cascadia subduction zone which has given us the Coast and Cascade ranges.