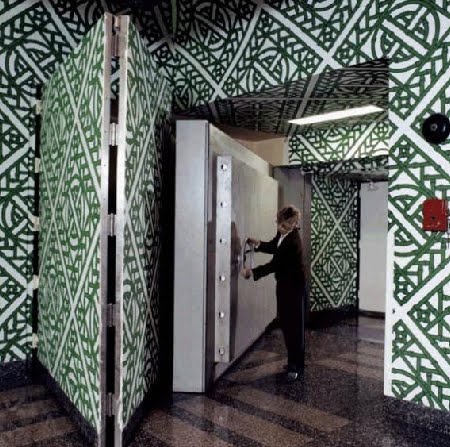 No, not Elvis’ home with the world famous Jungle Room, but rather the “Graceland of Atomic Tourism,” a disaster shelter built in the mid-1950’s for our very own government leaders.

According to this article, the United States government covertly arranged to build a fallout shelter to house the entire U.S. Congress underneath the Greenbrier Resort in White Sulphur Springs, West Virginia. As part of the deal, the five star hotel agreed that in case of nuclear war—or even just a realistic threat—the entire hotel would be commandeered by the government.

Note that the shelter was intended to house only the congressmen and their aides. It was not designed to accommodate their wives or children. Ouch.

Besides bunk-beds, TVs and furniture, there is a special room meant for holding and calming members of Congress who can’t handle the stress, and an incinerator meant for “pathological waste,” or — as the article puts it — the Congressmen’s irradiated bodies. The shelter also had two mock chambers of Congress, complete with flags, microphones and pictures of the founding fathers, all equipped to carry on U.S. government operations in case of nuclear war.

Sadly, the shelter is no longer operative since its location was revealed in a 1992 Washington Post article. However, you can still see photos and go on guided tours to see just how prepared for disaster our nation’s leaders were more than 50 years ago.

Read more about the Greenbrier Resort shelter.
And even more.
And more than that.

One thought on “We’re Going To Graceland!”