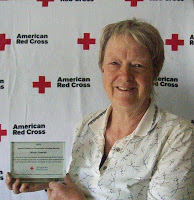 Melinda (Mindy) Sherrieb, a Baker City native and long-time Red Cross volunteer, was surprised when she was honored with a state-wide Special Citation for Exceptional Volunteer Service at the American Red Cross Oregon Trail Chapter Awards ceremony on May 8. “Surprised! Yes, because there are just so many other exceptional volunteers. I never thought I would be selected.”

Mindy has spent her life in disaster response services, first fighting fires and now teaching others how to best operate in crisis situations. She worked for many years as a wild land firefighter for Oregon’s Department of Forestry in Klamath Falls. After so many years doing, turning to teaching just came naturally. Mindy wanted to put what she had learned to work by sharing with others. And, one of her personal mantras is to continue to develop and use the skills she’s honed throughout her life. Her mom had already laid down a trail, volunteering with Red Cross in disaster response and preparedness. This path was reinforced by another of Melinda’s strong personal beliefs. “Government can only do so much, at some point citizens need to step in and serve the community.”

For Melinda that means helping others to understand the actions needed in disaster situations and assisting them to develop the necessary response skills. Besides, she loves helping people. One of her most meaningful moments as a Red Cross Volunteer was when she learned that one of her students used the training she had received to save a life. “That was huge!”

When Mindy first volunteered her services to the Red Cross, it took a while for the organization to benefit from her potential. In the early 1980s, the Oregon Red Cross still wasn’t fully utilizing the value volunteers could bring to the party. But after a time, the tremendous wealth of talent available became obvious. And Mindy, like many others, was pressed into service. Mindy, who comes across as fairly assertive, doesn’t believe in throwing up her hands if the organization isn’t doing what is needed. Her advice to new volunteers is, “If the system isn’t giving what’s needed for you or for those we serve, step in and make the system work. She cited a delightful example of this when she was supporting the Hurricane Trina relief efforts. It seemed that no desirable accommodations could be found for a dignitary visiting from another country, who wanted to learn from the work being done by the Red Cross. “We found him a place with one of the Red Cross camps. And that is where he really needed to be!”

Let’s all join in congratulating Mindy for her award, her great contribution and especially, her years of service.

Volunteer Spotlight is a new series written by Communications Volunteer Patrick Wilson. To learn more about the series or recommend a volunteer to highlight, you can reach him at bedfordguy@live.com.