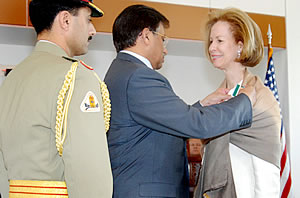 Cross Blog is never one to shy away from hot topics. And today, thanks to our Blog-Off moderators, we’ve been asked to comment on the breaking news of the day – the resignation of Pakistan President Pervez Musharraf.

Not only is Musharraf giving up presidential duties for his country, he’s also leaving behind another post…one that’s much closer to the hearts of Red Crossers around the world. As of this morning, Musharraf is no longer President of the Pakistan Red Crescent Society (PRCS).

Still, there are some international similarities. Here’s a quick glance at Pakistan and Oregon. You might be surprised at just how alike we are!

Sure, we’d love to be a little more political and talk about things like corruption and wasted (water) resources, but the reality is that neutrality on all sides is vital to our organization’s success. With that said, good luck to the Pakistan Red Crescent Society as they move towards new leadership!

See what the Water Blog posted here and vote with your comments below!