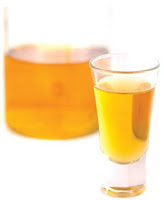 We’ve seen the classic images of St. Bernards carrying casks of brandy to rescue and revive travelers stuck on a treacherous mountain pass. And there’s no question that mulled wine and hot toddies provide warmth on the coldest of days.

So it should be no surprise that this prepare-aphernalia puts alcohol to good use in winter weather.

That’s right — now you can de-ice your driveway with a product made from vodka and rum byproducts.

According to this article, a scientist at an Eastern European vodka factory noticed how the pond behind the distillery never froze. After realizing the phenomenon was due to the sugary leftover swill that collects in the pond, the chemist figured out how to turn the mush into a de-icer.

The article goes on to explain that Magic Minus Zero can be applied directly to pavement before a snowstorm, or sprayed onto rock salt to neutralize the salt’s corrosive nature and double the salt’s impact. It melts snow and ice in temperatures to -35° F and is less corrosive than distilled water, doesn’t harm equipment or roads, destroy carpeting or flooring, or kill plants as rapidly as rock salt.

In fact, the company claims that it’s so safe that it’s edible before it’s sprayed on salt, but the bitter/sour taste makes it unpalatable for animals.

The sticky brown syrup smells like soy sauce, but contains no actual alcohol. Go ahead — invite your friends over for a de-icing party this winter…just makes sure they BYOB!

One thought on “Winter Prepare-aphernalia: Vodka And Rum De-Icer”