Apparently unlike Rumpelstiltskin, learning the name of ‘Eyjafjallajokull’ does not mean the problems will go away. Over at the BBC they have been soliciting outlandish solutions to the ash problem that, unlike spinning straw into gold, are still scientifically possible. At first, the BBC produced their own list, and then opened to reader suggestions. Both lists were sent to scientific experts for review as to their strengths and weaknesses. 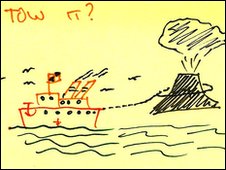 One of the reader proposals involved ‘towing the Volcano further north and away from prevailing winds’. I couldn’t help but notice that their diagram (to the right) includes a Red Cross vessel. Unfortunately, the expert pointed out that removing the confining-pressure from the subterranean magma supply below the volcano would likely explode with tremendous force producing an ash cloud rising to a 60 km (37 miles) altitude.

So, I guess this means the Red Cross should not get into moving the tops of volcanoes. Take a peak at the lists for some intriguing ideas, and if you have your own ideas feel free to post them in the comments!