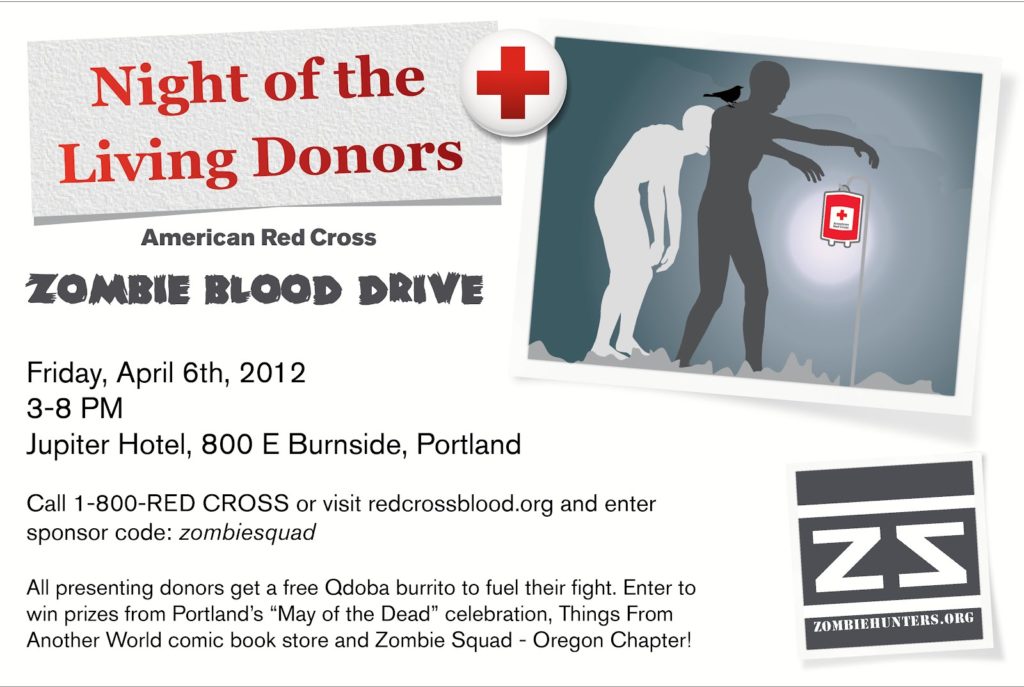 From Thriller to Shaun of the Dead, we all know what will happen when zombies attack. Dancing in the streets, yellow glowing eyes, comedy hijinks and, uh, there’s that part where they try to eat your brain and convert you to zombie-ism.

On Friday, April 6, 2012, Portlanders have the chance to defend against the threat of the undead. Join the ranks of Zombie Squad, the Red Cross and Jupiter Hotel to rally for the “Night of the Living Donors” blood drive from 3 – 8 p.m. at Jupiter Hotel, located next to Doug Fir Lounge at 800 E Burnside Street.

All presenting donors get a free burrito from Qdoba Mexican Grill to fuel their fight. Enter to win prizes from Portland’s “May of the Dead” celebration, Things From Another World comic book store and Zombie Squad – Oregon Chapter! Jupiter Hotel will also provide complimentary orange juice and First Friday art gallery access for all presenting donors! Snacks, cookies and coffee will be served, along with other standard refreshment items.

Scope out upcoming “May of the Dead” events and other zombie activities and get educated on disaster prep from Zombie Squad, who will have a “bug out bag” (BOB) display and trifolds of propoganda. Dress the part for extra kudos and snap photos with Zombie Squad’s costumed hunters and minions of the undead.

Destruction from the zombie apocalypse is NOT inevitable. With the proper precautions, survival is possible! You may have seen enough zombie flicks to predict their moves, but without a defense plan, you’ll be dead faster than a zombie can say “RRARRAAGHHH!”

When the zombie apocalypse goes down, you’ll want to say you helped save the day. Let’s keep Portland weird and give the city the blood drive we deserve!

To participate, here’s how it works:
1. For more information and to schedule your appointment, call 1-800 RED CROSS or visit redcrossblood.org and enter sponsor code: zombiesquad to register as a donor for the April 6th drive at the Jupiter Hotel.
2. Blood donors must be at least 16 years old (16 year-olds require a signed Red Cross parental consent form) and meet minimum height and weight requirements.
3. Donor appointments are not required, but are preferred.