LOST ended it’s epic run last night, and it has left us with many messages. Some are more obvious than others. Target helped point out one major lesson, and that is how to combat the smoke monster. By having a smoke alarm, of course!

Here are a few other lessons we have learned throughout the seasons as they relate to health and safety.

Season 1- It is important to donate blood and know your blood type. In the first season, Boone died after losing too much blood. Out of the 40+ survivors, only four knew their blood type and none were compatible with Boone’s except for Jack himself, who has O negative (universal donor).

Season 2- When you travel, make sure to see a doctor about vaccinations. Desmond was instructed to take a vaccine every nine days. Claire’s baby had some trouble when the threat of an island disease caused a fever. Newborns are particularly vulnerable. 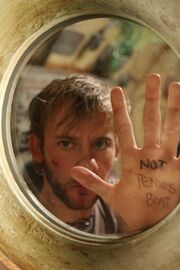 Season 3- Flooding is a major concern that everyone near (or below) the water level should be concerned about. Charlie might have been saved if he followed some basic tips such as knowing his evacuation route in the Looking Glass underwater station. As with any problem though, grenades can cause additional complications.

Season 4- We use chemicals every day, however chemicals can be poisonous or have a harmful effect on your health. The Tempest station stored harmful chemicals for the islands’ Dharma personnel. Some preventative awareness tips can prevent you from becoming a victim of a ‘Purge’.

Season 5- As Portlanders are learning well, you need to be prepared for any type of weather. You never know when one minute you might be fighting frost to turn a giant wheel, and the next you are in a Tunisian desert on the other side of the planet fighting off the heat. This was something that Portland native Ben Linus had to face. Having the proper clothing, listening to alerts, and staying in or out of the sunlight are just some of the tips for battling heat waves and winter storms.

Season 6- Smoke can take many different forms, some that are visible and some that aren’t so visible. Smoke alarms are just one of the high-tech gizmos you will need to alert you to an unwanted presence. Having a carbon monoxide detector and fire extinguisher also help. If you do spot smoke it might be a clue to run, so make sure you have an escape plan ready.