If you are reading this blog, you most likely have asked the question ‘what sort of hazards could impact my home and workplace in a natural disaster?’ This week the Portland Bureau of Emergency Management released something that should help answer that question for the city: a series of highly detailed maps overlaying the major types of hazards related to the big natural disasters. 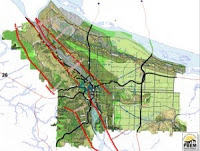 The maps take into account known earthquake faults, flood plains and other dangers, including hazardous material sites, steep slopes and forested areas at risk of fire. There is a complete map of Portland, or you can download a closeup map of the hazards or resources for parts of the city. This map series is particularly interesting because it includes hazards most of us tend not to consider, including areas that could be prone to liquefaction (an earthquake phenomenon in which solids, when shaken, behave like liquids) and notes the locations of unreinforced masonry buildings (brick buildings indicated as blue dots on the maps that could easily collapse). Downtown Portland appears to have many unreinforced masonry buildings… sitting on fault lines.

These serve as good reminders to have a kit and be prepared as it is hard to predict what will happen and when.  With many businesses in some of the most hazardous areas, it is also wise to ask if your workplace is Red Cross Ready.